Paul Windows recently took part in a charity event. Here is his account. 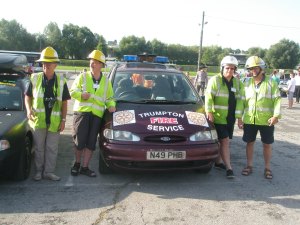 Trumpton Fire Service has just completed the daring challenge of a 2100 mile round trip to Monte Carlo raising money for Prostate Cancer UK which is one of the charities Monmouth Rotary Club is supporting this year.
The trip came about as a result of a mad decision by three Monmouth Rotarians and me to enter a banger rally called “Monte Carlo or Bust”. The organisers questioned our age profile as most competitors would be younger and they thought Rotarians may not have the stamina. They also questioned the size of our vehicle but were informed it was necessary to take the zimmer frames.
The challenge is to get a vehicle for £250 or less and drive from St Quentin in France to Monte Carlo in three days. The potential vehicle an 18 year old Ford Galaxy was spotted on the car park of the Royal Oak where it had lain unloved for many months. A quick chat with Doug Morris at the pub and the vehicle was generously lent to the intrepid crew. The first challenge was to get it through an MOT which required several days of mechanical input and many parts. Finally it was presented to Whitchurch MOT centre where Adrian Marfell confirmed it was fit for the road and donated the cost of the test as a contribution to the fund raising for which we are grateful.
The next challenge was to convert the Galaxy to an engine fit for the Trumpton Fire Service. Yellow stripes, emergency flashes, blue flashing lights and a speaker to play the Trumpton theme were added, together with two fire extinguishers to tackle the other competitors in the rally who had water pistols – no contest when it came to the water fights.
Thursday the 18th saw Trumpton Fire Service roll out of Monmouth towards Dover with Captain Flack, Fireman Cuthbert, Dibble and Grub aboard. A smooth crossing in blazing sun and a 100 mile run from Calais to St Quentin where we signed in at Rally HQ ready for the start on Friday. St Quentin turns its square into an urban beach during the summer with much sand, deck chairs, beach huts and all the paraphernalia of the sea side. This required the wearing of beach wear in the evening so many Hawaiian shirts were on display.
Friday morning and we joined the other 80 vehicles from across the UK ready for the start of Monte Carlo or Bust. What an array of wackiness! The Red Baron and his plane were there, a van as a garden shed, a jeep with a complete garden on it’s roof, the RAF in an old Jaguar ….what an amazing collection most of whom were raising money for causes close to their hearts. Every day there was a costume theme which saw The Trumpton Fire Serve well turned out at the start in their uniform ready to go. After a drive through the Champagne region we eventually arrived in Dijon, the overnight stop. Day two costumes were ‘onesies’ which saw Fireman Dibble don a
Skippy the kangaroo costume only to be assaulted by five Australian women on a European tour and who were home sick. The destination on day two was Turin which followed a route along the north side of Lake Geneva and over the Great Saint Bernard Pass where snow and a Saint Bernard dog greeted us at the top of the pass. The fire engine coped superbly with much 1st gear work but the engine never missed a beat, although the brakes did smell like rotten fish on the way down. The electric front windows decided not to open and the rear would only open half way so the crew suffered for the rest of the trip as we also had no aircon. Day three was the final run down from Turin over the Alps to Monte Carlo. Unfortunately sellers of expensive red cars had booked out Casino Square so we couldn’t stop for a photo; therefore it was on to Nice for our final night and prize giving – we didn’t win. The total journey distance from Monmouth and back was 2100 miles – not bad for an old Galaxy!
Lasting memories of the trip are running through a long tunnel under the Alps chasing an old Volvo decorated as a John Derre tractor with a stuffed sheep on it’s roof, while we had the flashing blue lights on playing the Trumpton theme complete with siren. I don’t think the CCTV monitors could believe their eyes. The great friendship and fun with like minded people who were raising money for charity, which is what Rotary is about.
Donations to Prostate Cancer UK can be made via Monmouth Rotary Club on the following link.
https://mydonate.bt.com/events/montecarlo.