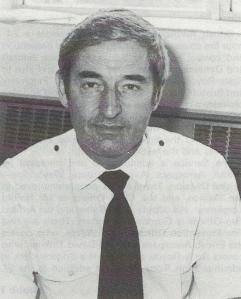 It is with much sadness that we have received notification of the death of retired Divisional Officer John Parnham who passed away on 27th March 2020.

John was 90 years of age, his passing was not in connection with the current virus sweeping the country. John first joined the Fire Service in Sheffield, following his service in the Fleet Air Arm, where he served on HMS Illustrious. In 1964 he moved to the Gloucestershire Fire Brigade following a short period at the Cheltenham HQ he was posted to Thornbury as Area Fire Prevention Officer. 1974 saw the formation of the County of Avon Fire Brigade where he was promoted to Assistant Divisional Officer serving the Bristol and northern areas, 1979 saw he promoted to Divisional Officer which included the high risk Avonmouth Docks. John was also the secretary of the County of Avon Officers Club for many years, he retired in August 1982.

He leaves his wife Angela, a son Phil (who is a current Watch Manager with AF&RS) and daughter.

A letter of condolence will be sent to the family.

We do not know of the funeral details, however, given the current situation, numbers attending will be restricted.